Fleetwood ultimately got up-and-down for par, making a 4-footer to win the tournament and his second-career Rolex Series win. NGC RolexSeries pic.

Thomas Detry, Jason Scrivener and Bernd Wiesberger finished tied for third place, four shots out of the playoff on 8-under total. This was the second of three Final Series events, with the top 60 available players in the Race to Dubai qualifying.

Thomas Detry and Jason Scrivener moved into the top 50 in the Race to Dubai rankings, earning a place in the season finale in Dubai.

We use the Golf News Net byline sometimes just to change things up. But, it's one of us humans writing the story, we promise.

We also occasionally include links to products and services from merchants of our choice. Kinhult got up and down for bogey but that was not good enough.

His card was colourful featuring four birdies, three bogeys and crucially three eagles which ultimately helped him to the top of the leaderboard.

Four birdies in his opening six had him well in contention and despite a bogey at the 7th he carded a further birdie at 15 that would eventually force the play-off.

Horse-shoe and in! Elsewhere, Zander Lombard began the day with the lead but a final round of 5-over ended his challenge and fellow South African Louis Oosthuizen also struggled to a tie for 4th alongside defending champion Lee Westwood.

Joachim Hansen hit a very relatable shot out of a bunker on Saturday, but the outcome was something club golfers everywhere will envy.

And for those of you that missed the final round 65 from Fleetwood or simply want to watch it again. Check out the highlights below. Tommy's back! 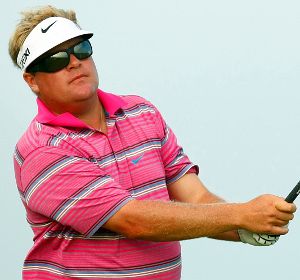